Reasons that Reunite Families – Chapter 6 in The Chronicles of Heritage

by Amalia | The Chronicles of Heritage - A Blog Series

Continued from Chapter 5 in The Chronicles of Heritage…

During the 1940s, the area of Punta Cana in the Dominican Republic was remote and wild. For my grandparents, it was the ideal paradise, a refuge of virgin beach for their deep love and commitment to each other. Yet after a year of living there, far from the life-threatening disapproval of my abuelita’s family, they became pregnant with their first child. Leave it to a baby, that seemingly powerless embodiment of new human life, to wield a power that brings families back together.

It seems pretty common knowledge that the circumstances surrounding the birth of a baby are life-altering, to say the least. In some stories, the ripples a new birth creates are seen clearly in the expanse of lives that are touched.

This is the case with my mother’s birth. And knowing my mother, that doesn’t surprise me. She still makes quite the ripples in life.

Word of my abuelita’s pregnancy reached her family, along with the stark reality that came to everyone’s mind – Dinorah and her lover were living in a very remote area of the island with no medical care nearby. It was imperative to be near a hospital as the due date grew closer.

I am not sure what conversations were had when my grandparents arrived back in Jarabacoa. The story goes that perhaps my great-uncle showed up at their house with a rifle, but I am not entirely sure. What I do know is that no harm was done by anyone, not a trigger was pulled or shot fired.

I like to think that the family saw that my abuelito truly loved my abuelita… that they were touched by the upcoming arrival of a new bundle of life and manifestation of this love that risked so much. And I am glad that both sides of the family chose to value all the lives involved more than their rules and their ideas of how life should unfold.

Some things still took some time, yet between the birth of my mother and my grandparent’s devotion to each other, my abuelita’s family came to accept and love them. After my mother Maria Angelines del Riego was born, her siblings came along over a period of the next four years. Her sister Amalia and brother Jose were another addition to the family.

They grew up in my abuelita’s hometown of Jarabacoa, just around the block from my bisabuelo (great-grandfather) and my tio abuelo (great-uncle) who lived just across the street from his father. To this day, my tio abuelo still lives there with his wife.

Since writing this, my bisabuelo passed on to the other side. He was only a few weeks from his 105th birthday. I count myself so fortunate to have known him and enjoyed times with him, even up to the summer before his passing.

Even to the very last, he walked on his own, showered on his own, and his mind was sharp. It makes me chuckle to recall how he never lost his appreciation for a beautiful woman – when sitting on the front porch throughout the days, he would enjoy watching the women stroll by. I know because he would tastefully comment and make his observations and appreciations known.

I think on him strongly at the close of this particular chapter, because I remember how clearly he would look at me… as a child and then later as a young woman… with family care and love. And I believe I saw in his eyes, even the last time I saw him, a sense of wonder and awe that a love he once tried to forbid, had led to so many other beautiful lives that make our family.

I know that he was grateful that his daughter and her lover pursued their hearts as they did. Such traits of character can be traced back throughout our family, even to distant Spain before my abuelito’s life. Legacies go back so far and continue on in surprising ways… to be continued!

Read what happens next in The Chronicles of Heritage. 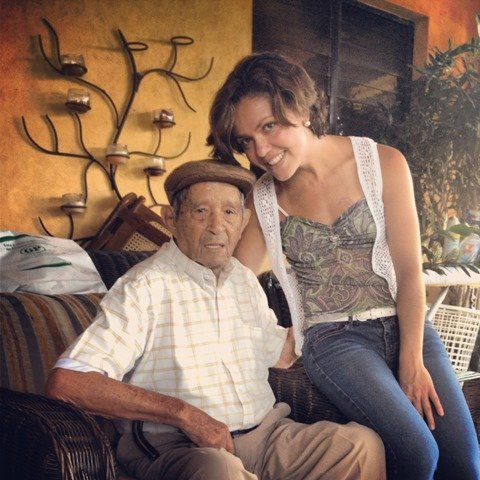 Me with my bisabuelo (great grandfather).