The Castle of Segura de Leon 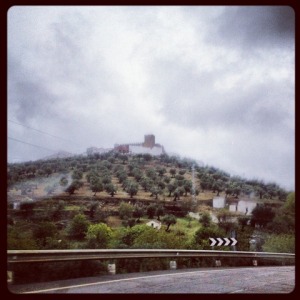 I spent my Sunday afternoon visiting the little nearby village of Segura de Leon. The scenic drive was not even fifteen minutes from my mom’s village of Higuera la Real in the Spanish region of Extremadura. This area is for me the epitome of what is called rural Spain, with green hills rolling through vast countryside, interspersed with small ancient villages and fields of olive trees and grazing cerdos (pigs). It had been raining for the past two days and was still raining, however it didn’t bother me or keep us from venturing out. I particularly enjoyed how the weather contributed to the experience and made me feel like I was in Medieval times. Our drive through the countryside was a landscape filled with heavy charcoal-colored clouds coloring the sky grey. Rain was sprinkling down and the whole scene reminded me of my travels to Scotland and Oviedo, Spain – lush, verdant, wet and cloudy, grey and chilly. Some wouldn’t enjoy going out in this weather, but for me it’s not so bad every now and then. It enhances the adventure, feeling cozy and yet mystical. 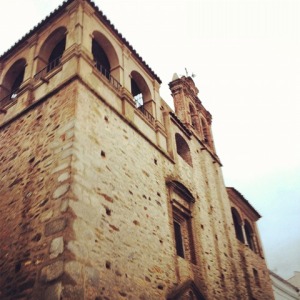 As we rounded a bend in the road, a large sloping hill came into my view and there on its summit was the castle! I loved seeing how the village was crowning the top of the hill as well, the many Spanish-tiled roofs and white-washed walls clustered close around the castle. However, what was more evident and visible were the rows of olive trees, their dark rich green leaves standing out even in the dark stormy weather and dim light of the afternoon. Following the directions we had, we turned into a small road that was to lead us to the center of the village. The street was narrow and steep, causing our little old vehicle to struggle up the old cobblestone road that was now slippery with rain. Making lefts and rights, we drove the maze of streets higher and higher up the hill till we arrived at the plaza marking the center of town. Parking there, we popped open our umbrellas and started to walk towards the bit of castle wall we could see rising up at the end of one of the little streets. Walking up this street we passed an old little church that had a classic steeple that I stopped to admire. Further up, I looked down another street to my left and there saw a view of the distant hills in the outlying countryside. Dark green and with shades of grey rain falling like a curtain, it was so beautiful and it seemed as though I was looking through an enchanted window or viewing a painting.

Then we came to the top of the street and entered into the Castle of Segura de Leon. Walking through the classic arched gateway, we entered into a large open courtyard that was enclosed by towering walls and ramparts. In the far opposite corner rose a tower in the classic style of a fortress watchtower, rectangular in shape and boasting the highest point of the castle and the town. We stepped into the lovely columned portico, taking shelter from the rain and to find out about seeing more of the castle. Here is where a cafe exist as well as the reception desk and entrance to the Hotel Rural “El Castillo”, which in English means the rural hotel, the castle. This is one of 93 hotels in a great system called Paradores de Tourismo. It started back in 1928 with only one establishment of 30 beds and is now an organization that is part of the Spanish government’s tourism policy. The company focuses on accommodations that are in beautifully restored and maintained historical buildings, such as castles, palaces, convents, and monasteries. And don’t be deceived by the description, instead be excited that the prices are in my opinion quite reasonable. Yes, it may not be as cheap as a hostel, but for traveling with others and for the experience, they vary in an affordable range and well worth the investment. I have been inside only a couple of them and have yet to stay in one, but I will certainly let you know when I do.

It was going to be getting dark soon, so my mom and I paid the couple of euros each for going up to walk the castle walls. The staff we met there were only the two people in the cafe. A lady behind the bar and the chef who was chatting with her from his perch on one of the bar stools. With friendly demeanor they pointed us in the right direction, gave us instructions and some tips, and we headed off on our self-guided tour. It was pretty neat being able to stroll through the open courtyard, craning our necks to admire the tops of the walls. Then we found the iron gate door in the far opposite corner, where we unlocked the large ancient latch and climbed the steep flight of old stones. With the rain, it was a bit slick and I used the iron chain that was bolted into the rock wall, its large oval links ice-cold and hard in my hand. At the top we were granted the most beautiful view of the countryside, peeping through the battlements (and by the way, here’s a great site for a glossary of castle terminology: Castles on the Web). The array of large rain clouds filled the sky with such a splendid tone of grey that cast a lighting on the castle stone that made me feel like I had traveled back in time.

From where we had come out onto the wall, we could only go in one direct, so we started to walk along the wall, all the while realizing that the sun was setting behind the rain clouds and that it was growing darker by the minute. Our goal was to reach and explore the tower at the far end. Passing along the constant battlements, we at one point saw a small rounded alcove that formed one of the corners of the wall. It’s entrance was small and it was dark inside, looking eerie and mysterious as I peeked in and saw the tiniest bit of natural light showing through the arrow loops that were on the opposite side of its inner wall. From what I could make out, it seemed to be a very small space and I imagined how smothering and confined it may have felt long ago for a knight to have been crouched in there, bow and arrow ready in hand to fire through those small slits to enemies below.

We continued on our way, getting to pass under a small stone arch that marked the end of the rampart and the entrance to the tower. My eyes took a moment to adjust to the much dimmer lighting inside the tower. The ceiling was high and this first floor had tall windows set into recesses in two of the walls. They provided more views of the countryside view where now we could see little shinning yellow lights floating down grey ribbons as cars traveled down the roads in the deepening darkness. Even though it was practically dark out and night fall was descending, we decided to still go up to the very top. The stairway was narrow and downright creepy and dangerously steep and uneven. I will shamelessly say here that my mother was the one to start up, no hesitations. When I mumbled something about it perhaps being too dark to go up, she quickly instructed me to use my cell phone light and didn’t even break her stride as she climbed further up and disappeared from my sight into darkness. So, grabbing onto the thick rough rope bolted into the rock wall, I did just that. Towards the top, the stairs took a sharp turn to the left and pretty soon, I was stepping out onto the top of the tower. The 360 degree view was impressive. Slowly, I turned around to gaze over the nearby fields that I could still make out just past the edge of the village. Then further out in the distance, the hill ranges were a creatively fluctuating line of black along the horizon with the sky. My favorite was seeing little towns dispersed far apart throughout the landscape, their position given away by the many twinkling white lights that dazzled on as night was approaching. We soon made our way back to the cafe, descending the pitch-black tower staircase successfully and finishing what we were allowed to see on our tour of the castle.

The cafe was a great reprieve from the cold blustery wind outside. The dampness from the air and rain had seeped into my bones and I was ready to teach the bartender how to make me a hot toddy – en un vaso de agua caliente, añadir un chupito de whiskey, limon, y una cuchara de miel (in a glass of hot water, add a shot of whiskey, lemon, and a spoon full of honey). The part of the castle that housed the cafe and the hotel reception room was my favorite. It’s portico, or front porch area, had ivy wrapped around the pillars and strewn between them. Standing watch by one of the doorways was the armor of a knight. I’m always keen on these kinds of remnants of times past, so I got a picture taken with him. And no, I’m not trying to battle with him with my trusty umbrella, but it does look I am, doesn’t it…

Our afternoon castle tour was wonderful, even in the rain. I never tire of exploring a good castle. Each one I have visited is unique and holds layers of history and time in its ancient stones and much to still learn from things like its strategic location and layout. Who ever said time travel wasn’t possible? With landmarks like these still around to enjoy, I believe otherwise. Enjoy the couple of pics that capture the quaint village center as well, with its beautiful weeping willow tree and fantastic little European cars.