Whatever you do…do NOT go to Venice and miss out on eating in one of the best and oldest bars there, Caffe dei Frari. I came across this fantastic spot this past April when I was strolling around Venice and finally made it to explore the Campo dei Frari (the square where the Frari Cathedral is located). My iPhone battery runs out pretty quickly with all the pictures I like to take with it, so I saw the caffe and stopped in asking if they happened to have a charger for the iPhone. They fortunately did and from there, it was the beginning of yet another beautiful “discovery” in Venice.

On that first visit I met the owner Francesco, who in my opinion is the source of the great vibe that makes Caffe dei Frari a dynamic place to be. Not only is he a great cook, which I’ll prove to you further in this post, but he also loves music and is a great DJ. As my iPhone was charging, he helped me choose one of the three amazing German beers that they serve on tap there. We sat with a couple of his friends since the place was pretty quiet on that rainy Sunday afternoon and I got to learn a lot about how the Caffe is one of the oldest ones Venice that is still open. Dating back to 1870, the walls still have the original renaissance paintings that depict men and women enjoying picnics in the countryside and what San Marco Square looked like during festivals in the past. I especially loved when I looked up in the middle of the ceiling to see the dark wood banister bordering a large oval opening that gave glimpses into the second floor. If you want to enjoy standing just outside the front doors, a scenic canal and bridge is the picturesque environment right in front of you with the Frari Church just across the water. 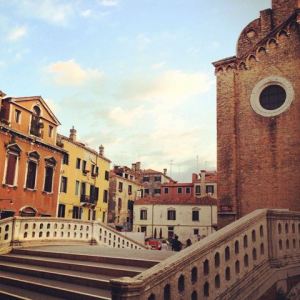 The view of the Frari square and church from in front of the caffe.

When the conversation turned to the common interest of music, a whole new experience took place that made the bar come alive. Francesco cleared off the built-in wood record player holder that he had built and began to spin and mix from his extensive collection of vinyl records. With his headphones on and working two record tables at a time, he showed himself to be a self-made, full-on DJ that occasionally plays at other events, but otherwise does it right there in the bar simply for the love of it. I soon learned that it’s also probably for the love of his friends and people…within a matter of minutes the vibrant beats of the music emanating loudly from the caffe drew in more and more people, some friends and regulars native to Venice and others visiting tourists like myself (well, sort of like me…I don’t consider myself a tourist anywhere I go). Hearing that many weekends he mixes music for his friends and a lot of locals later in the night on Friday or Saturday, I was sad that I was not going to be there that weekend to enjoy an impromptu dance party. 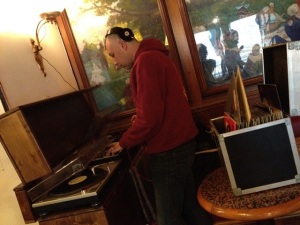 So when I returned unexpectedly to Venice a few weeks later, I made a point to go back. After all, I had to start making myself a regular and only had a week to accomplish that. This time I enjoyed lunch there and they even did a custom salad that was the best I ever had in Venice. Picture in your mind (since I didn’t take a picture because I ate it so fast) a large square plate with fresh greens piled in the middle and topped with cherry tomatoes. Along one side of the salad is an assortment of colorful grilled vegetables such as zucchini strips, roasted red and yellow peppers, marinated mushrooms, and caramelized sweet onions. Then on the other side is thinly sliced carpaccio (rare beef) that was such a delicious quality – I can still remember how good it taste! Wedges of different cheeses completed a corner of the plate and drizzled beautifully over everything was olive oil and some dashes of balsamic vinegar with crushed sea salt and fresh ground pepper. Is your mouth-watering yet? Because my stomach is growling just recounting the dish.

Nothing else was needed, the dish was so good on its own, and only the glass of red wine that I enjoyed with it added to the experience. From all his years in the restaurant business, Francesco has a true talent for cooking and for knowing wine and good drinks. So after this lunch, it is no surprise to me that the bar has done so well under his ownership for the past many years.

I ended up visiting again around dinner time a couple of nights later and was delighted to see the fresh seafood that he kept on hand. Before I knew it, Francesco was cooking up a storm, and by storm I mean a beautifully freshly amazingly delicious seafood pasta and full course dinner that I had in all my time in Venice! Yes it was that good…I mean, look at the pictures… 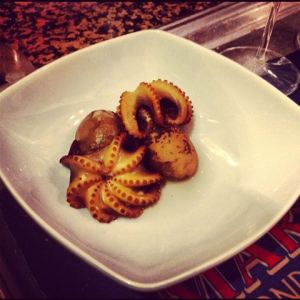 From the fresh local mussels to the baby octopus that is a particular kind found only in the lagoon areas surrounding Venice, to the rare tuna fillet, I experienced tastes that I had never known could be so good with these foods. I had tried all of these things before, but there was a distinct difference that absolutely spoiled me for the future now. The mussels in particular were my favorite because they had a smooth sweet taste to them and even looked a bit different with a blotch of dark pink on the meat of the mussel itself. I really love mussels and they were the best I had ever had. And this was just the first course! Then came the delicious spaghetti pasta lightly coated with a high quality olive oil that he explained was made by a friend in a nearby region. Mixed in with this were sautéed cherry tomatoes and zucchini that when served was topped with large whole shrimp. The delicious pasta-vegetable-seafood medley gave a spicy kick as well thanks to the small chili peppers that he cooked into the sauce early on. 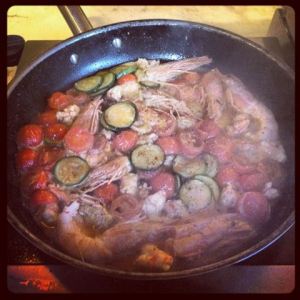 Thinking back now the great experiences I had at Caffe dei Frari makes me realize more and more that the owner of a place can really be the key to its success. My appreciation and thanks go to Francesco for his generosity and friendly kindness to me as I became a regular of this special place in Venice. I look forward to going back one day. And like I said at the beginning…don’t you dare go to Venice without stopping in there and make sure to visit more than once. 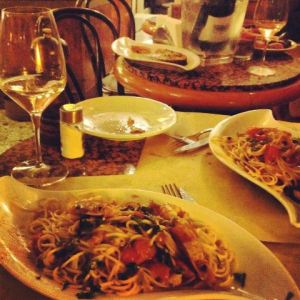